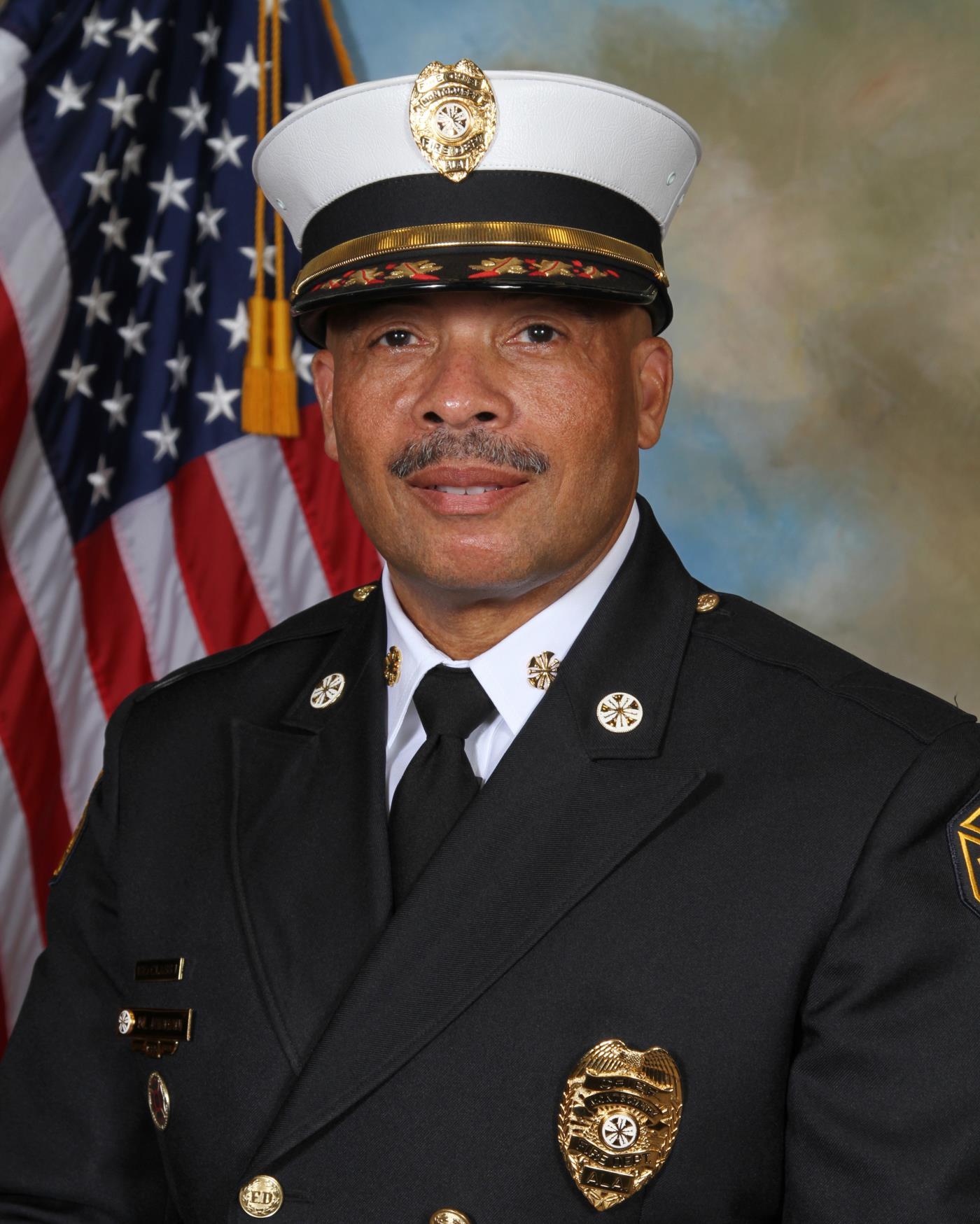 Fire Chief Miford Jordan was born in Lowndes County (Ft. Deposit) to R. D. and Mary Jordan, a farmer and a seamstress. He is the 11th child of 12 children. He graduated from Lowndes County High School and was a star athlete in football. After graduating, he joined the United States Army National Guard, where he served for 12 years and was activated during Desert Storm in 1990.

In the 121 years of the City of Montgomery Fire Department history, he became the first African American to become Deputy Fire Chief and also the first African American to be appointed Fire Chief. For the City of Montgomery, known as the birth place of the Civil Rights Movement, this shows progression, diversity, and this City has come a long way with change.

Fire Chief Jordan’s motto is “Be competitive, be motivated, and you can do whatever you put your mind too.” Colossians 3:23, “Whatever you do, work at it with all your heart, as working for the Lord, not for human masters”.

Fire Chief Jordan took the helm of a department focused on the fire service side of Public Safety, and created a system that works to ensure service in all areas of public safety. He revised promotion requirements and pay incentives to create a desire in our members to attend paramedic school and specialized training programs.

Being a believer of giving back to our community, he is proud of the support given to our community as the Montgomery Fire/Rescue has raised $1,395,296.90 for MDA and $609,003.65 for the United Way over nineteen years. Over the past eight years, Montgomery Fire/Rescue has also donated approximately $45,000.00 to The Cancer Wellness Center and Women of Hope.

Fire Chief Jordan is very passionate about the health and wellness of the members of Montgomery Fire/Rescue. Cardiac events are the number one killer of firefighters. This fact motivated Fire Chief Jordan to create a culture of fitness within the department. He worked with Auburn University of Montgomery (Dr. Hank Williford) to create a fitness program designed specifically for Montgomery Fire/Rescue firefighters. This resulted in firefighters who meet strict weight standards, take part in an annual physical fitness evaluations and annual job task assessments, and some who even compete nationally in fitness competitions.

In 2010, Fire Chief Jordan established a Combat Challenge Team to compete against firefighters around the world. Since that time, Montgomery Fire/Rescue has continued to demonstrate dedication to being the best. The Combat Challenge Team were World Champions in 2014 and 2015, barely missed it in 2016 and once again in 2017 and 2018 were named World Champions. Since 2011, the Montgomery Fire/Rescue has hosted five regional, one national combat challenge and two world event competitions with firefighters participating from thirteen countries and three provinces of Canada. Due to Montgomery Fire/Rescue’s past success Fire Chief Jordan has signed an agreement to host another World Event in October 2019.

In 2012, MFR received a $3,010,000 S.A.F.E.R. grant and in 2018, MFR again received a $5,762,988 S.A.F.E.R. grant.  Both grants served to staff the department with adequate fire and emergency response personnel.  In 2015, MFR was awarded an $819,250 Assistance to Firefighter Grant.  This grant served to improve firefighter safety and preparedness through the purchase of training equipment, a Driving Simulator and the installation of a diesel exhaust system in all MFR fire stations.

Fire Chief Jordan and Carolyn have been married for over 36 years and they have one daughter, Andrea (husband - Greg). They are also proud grandparents of two amazing grandchildren, (Braylon and Bradley). They are members of Pilgrim Rest Baptist Church.