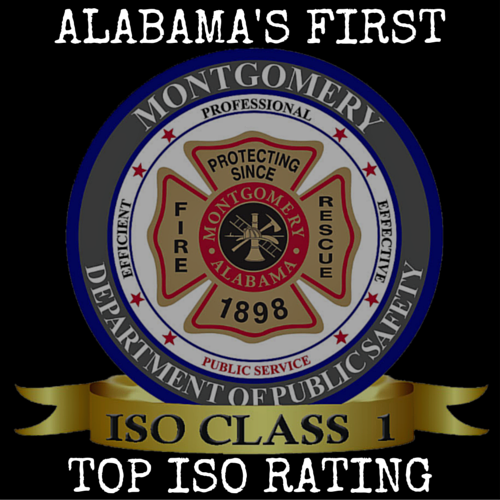 The City of Montgomery has been awarded the highest possible rating for fire services, earning a Public Protection Classification of “1” from the Insurance Services Office for providing superior protection. Montgomery joins an elite group of municipalities that has achieved this top rating — fewer than 0.2 percent nationwide — and represents the first class “1” rating ever awarded in Alabama.

In announcing this singular achievement, Mayor Todd Strange said, “Earning an ISO ‘1’ rating is a testament to the exceptional efforts of several organizations. Montgomery's Bravest have once again proven they are the greatest firefighters in the world, and we commend our Department of Emergency Communications and Water Works for their part in helping us secure this unprecedented achievement.

“We are among fewer than 0.2 percent of cities in the nation to achieve this status and have the peace of mind in knowing when an emergency arises our first responders are more than suited to handle the situation,” he said.

Fire Chief Miford Jordan praised the collaborative efforts and skill of employees throughout Montgomery Fire/Rescue. “I could not be more proud of our MF/R team,” said Jordan. “It’s meaningful to me to be part of securing the top ISO rating because of its importance to our city, and to have the opportunity to contribute every day to the safety of Montgomery.” The major portion of the public protection survey is an evaluation of the capabilities of Montgomery Fire/Rescue, including equipment, staffing, training, geographic distribution, community risk reduction and response times.

The survey also takes into account the capabilities of the Department of Emergency Communications and Montgomery Water Works, assessing telephone systems, telephone lines, staffing, dispatch systems, and the city’s water supply system, including the condition and maintenance of hydrants and the amount of water available and needed to suppress fires.

Montgomery received its last PPC evaluation 14 years ago. Prior to receiving the “1” rating, the city had maintained the second highest rating, a “2,” since the mid-1980s.