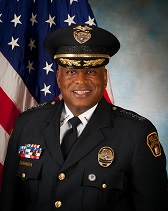 Montgomery Police ChiefErnest N. Finley, Jr. was sworn in as the new chief of the Montgomery Police Department on January 20, 2015, marking the 14thpolice chief in the city’s history. A 29-year veteran of the Atlanta Police Department, Finley was the Deputy Chief and assigned as the Field Operations Division Commander. He is a strong advocate of law enforcement working in partnership with the communities and developed numerous positive relationships with the citizens

Finley said it has been his childhood dream to become the chief of police of a major city and is excited to come to Montgomery.

Born and raised in Newark, N.J., Finley earned a bachelor's degree from Rutgers University and joined the police force in Atlanta in 1986. He has a master's degree in public administration from Columbus State University. He worked as a patrol officer first and later was appointed as chief deputy of the Field Operations Division in 2010.

Finley has big plans for the department and fighting crime in the various neighborhoods and commercial districts in the city, he said. Community policing, building relationships and trust with the community is key, he added, in moving forward.

"My vision is to guide and direct our MPD to provide customer service to our residents here, to address public safety concerns to prevent crime and to also to reduce crime through community engagement," Finley said. "The last thing is to really develop partnerships."